You are here: Home / Apps / Cash Reader: The Best Money Reader For The Blind 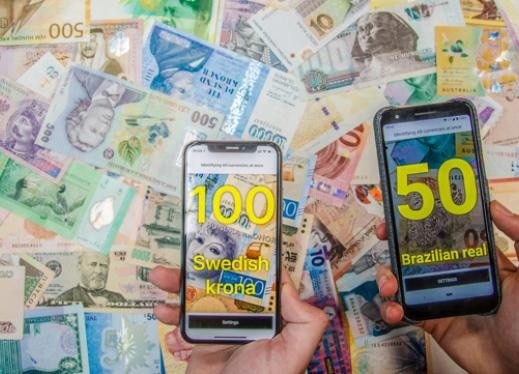 Picture this. You go to the store and are about to pay for a few items. The cashier tells you they cost $15, so you quickly take out your money and give him the exact amount. By looking at the different banknotes you could easily distinguish between the $10 and the $5.
Now imagine doing the same thing but without having sight to help you identify the different denominations. The first thing you might notice is that all the banknotes are the same shape and size. How would you know what to give the cashier – how would you know which banknote is a $10 and which is a $5? If you expected to get balance, how would you know what you were given and if you were given the correct amount?

For people who are blind or visually impaired, it is important to safely and quickly recognize their currency. Both when paying, and when receiving change.

Tactile marks can be helpful, but if they don’t exist, people still need a quick way of identifying their currency.

Blind people can identify bills by folding them in different ways. This of course requires some help identifying the currency.

Folding your money in all different ways works great most of the time but what about when you are in a hurry? Eventually it will get in a wadded up mass in a pocket somewhere.

Some visually impaired people do not trust the above methods, preferring to buy multiple layered wallets so each banknote can have its own compartment. This works most of the time. But it can also become confusing when blind people have to sort through many denominations. This method is not helpful when people need to carry different currencies at the same time.

Well, now you can sort your money all by yourself!

There are several currency identifier applications for the visually impaired on the market and most of them are quite good. However, there is an app that is preferred out there that always snag the most recommendations.

We took a look at some of those money reader apps for the blind and came up with the best.

What is Cash Reader? Why should you download it?

Cash Reader is a smartphone application that enables visually impaired people to identify currency independently. It detects the value of a banknote and reads it out to the person or vibrating the value if the phone is on silent mode.

Of all the currency identifier Apps for the blind we’ve tried, Cash Reader is the best. There is no double tapping or swiping, just put your bill in front of a camera and it speaks. Nothing could be simpler.

If you’re blind or visually impaired, Cash Reader will fit you like a glove. This easy-to-use money reader app acts as your eyes by identifying banknote denominations in numerous languages, including English, Spanish, Italian, German, Dutch,, Japanese and more.

How Did Cash Reader Start?

This highly effective money reader app was launched by Two Czech developers, Tomas Jelínek and Martin Douděra in 2018. It all started when a blind friend asked the developer Martin Douděra if he would create an app for him to read Czech banknotes. Together with Tomas Jelínek, they soon created Cash Reader, currency identifier app which has no competition in the world.

Cash Reader was well-received worldwide and won several accessibility awards, including the prestigious international AI for Accessibility Hackathon, which is held under the auspices of Microsoft in 2020.

Cash Reader uses the camera on a smartphone to recognize currency and speak or vibrate the denomination, turning the daily unseen into an audible experience.

After starting the app, all you need to do is to point your phone’s camera at the bill you want to identify, and the app will announce the denomination, either through speech or vibration patterns.

It doesn’t matter which way you use it, even if you show just a small portion of the note to the camera, it will work. This is important for people with disabilities such as blindness or coordination disorder, but it also provides a fast and reliable experience to users without disabilities.

Cash Reader works offline, under all light conditions, identifies folded or damaged bills no matter the side or angle.

Cash Reader provides reliable money identification on any smartphone using early Android versions to the recent and advanced phones; therefore, it can be used by almost all visually impaired people.

How Does Cash Reader Benefit You as a Person With a Visual Disability?

You can use Cash Reader to:

Why Should You Use Cash Reader?

Just because you have a visual disability, doesn’t mean you have to always depend upon the kindness of strangers to know the value of different denominations of paper money.

Cash Reader announces the denomination in your choice of two ways: It can speak the banknote amount; or it can vibrate silently, which may be helpful in keeping your financial information private when you use the app at a cash register or count your change.

The application doesn’t need an Internet connection to work, which means you can read money at any location, and at anytime.

Whether you want to verify money while checking out or to ensure you are getting the right amount of change back, let technological advances like Cash Reader bring light to your life and give you an independence you never thought possible.

Technology can help people overcome challenges and make the world a more accessible place. People who are blind or visually impaired can become more independent by using apps such as Cash Reader to identify currency.

Do you know anyone who might benefit from Cash Reader? Have you seen how technology can help people overcome challenges? Share your thoughts in the Comments section below!